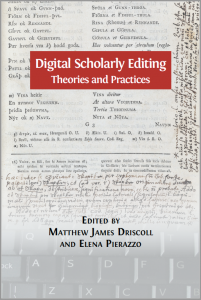 The latest Digital Humanities monograph published by Open Book Publishers, Digital Scholarly Editing: Theories and Practices, includes a chapter written by Greta together with Melissa Terras and Simon Mahony from the UCL Centre for Digital Humanities. The chapter is entitled A Catalogue of Digital Editions and reports on an homonymous ongoing project that collects and analyses digital editions in an attempt to identify best practice in digital scholarly editing.

Greta will be presenting the Catalogue of Digital Editions project in the form of a poster at the upcoming Text Encoding Initiative conference in Vienna.

Future historians will describe the rise of the World Wide Web as the turning point of their academic profession. As a matter of fact, thanks to an unprecedented amount of digitization projects and to the preservation of born-digital sources, for the first time they have at their disposal a gigantic collection of traces of our past. However, to obtain useful insights from these very large amounts of data, historians will need more and more fine-grained techniques. For this reason, at the Data and Web Science Group, we focus on developing approaches that can sustain researchers moving from text exploration studies towards hypothesis-testing researches. These solutions benefit from the combination of entity linking and topic models, among other methods. Additionally, we also believe that historians who intend to employ computational methods as evidences for supporting a claim, have to use computational methods not anymore as black boxes but as a series of well known methodological approaches. For this reason, the second goal of our research group is to stress the importance of tool evaluation in digital history. In our talk, we will present an overview of some of the works we conducted so far, in collaboration with the Historical Institute and the Political Science Department of the University of Mannheim.

The board of the Göttingen Dialog in Digital Humanities is pleased to announce the three best contributions of this year’s GDDH series. The winner will be handed a prize of €500 and candidates in the second and third positions will receive a notable mention.

We are delighted to announce that the winner of the seminar series of 2016 is:

Hazel Wilkinson
from the University of Cambridge, United Kingdom
with
“A database of printers’ ornaments”

The prize is awarded on the basis of an evaluation of both the paper and the quality of the presentation, for which this candidate received 85.73/100!

The winner is followed by yet another worthy candidate with a paper entitled “Inferring standard name form, gender and nobility from historical texts using stable model semantics”. The paper, written by Davor Lauc and Darko Vitek and presented by Davor Lauc from the University of Zagreb in Croatia, receives a notable mention for its high standard and well-presented research results. This candidate received a score of 79.84/100.

The second notable mention is awarded to the paper “Experiments of distributional semantics in stylometry” by Giulia Benotto from the Institute of Computer Linguistics (CNR) in Pisa, Italy. This paper and presentation follows with a total score of 75.68/100. This candidate was appreciated for the originality of the topic and the clear explanation of the methodology.

The slides and videos of these talks are available here.

END_OF_DOCUMENT_TOKEN_TO_BE_REPLACED

Just like the happy ending of a fairy tale: the Franzini sisters win an ADHO Bursary Award of 2016 for research on the Grimm brothers!

Once upon a time there were two sisters, Greta and Emily. The sisters lived in an old building called Heyne Haus in the small German town of Göttingen. As Digital Humanities elves they busied themselves to find something that would keep them occupied indoors during the cold winter of 2015. And like the Grimm brothers who lived in that very same town two hundred years before them, they started, together with a group of loyal companions, collecting stories and motifs. Fairy tale motifs to be precise…

The Digital Breadcrumbs of Brothers Grimm project, which began in October 2015, is collecting and automatically detecting folktale motifs as text reuse units or minimal primitives. In fact, with this project Emily, Greta and their colleagues (constituting the early career research group eTRAP) are addressing two specific challenges of their field: text reuse detection at scale and cross-lingual text reuse detection. While they’ve already experimented and have shown good results for the former (download the DH 2016 slides and poster from their website here, the latter challenge is still ongoing as they’re in the process of manually collecting the necessary data in order to train TRACER, a text reuse detection engine comprising 700 different algorithms, and other software, to detect motifs across multiple languages. For this challenge, they’ve selected three Grimm fairy tales to work with: Snow White, Puss in Boots and The Fisherman and his Wife. To push their research forward, the sisters and their team find and read as many versions of these tales as they can (original versions, not translations, both predating and following the Grimm collection), collect motifs therein and add them to a matrix that maps languages against one another. In the second stage of the project this multilingual dataset will be used by the software tools to automatically find other matches at web scale. Furthermore, the dataset will be integrated with existing ontological resources and will lead to an exploration of folktale motifs as Linked Open Data. With the Digital Breadcrumbs of Brothers Grimm project, Emily, Greta and their team are not only able to advance research in automatic text reuse detection, but can also support folklorists and literary scholars in tackling the large amount of folkloristic materials now available online.

There are no upcoming events.